I’m very fortunate. Even though I love cooking, there are nights that I just don’t want to spend time in the kitchen. When that happens, Mark is always happy to step in and take care of things. He’s a great cook.

This is one of the dinners he cooked up recently. Its a one-pot meal – you don’t have to cook the pasta separately, just keep adding things to the pan and in the end you have a creamy, spicy pasta dish. It was awesome. 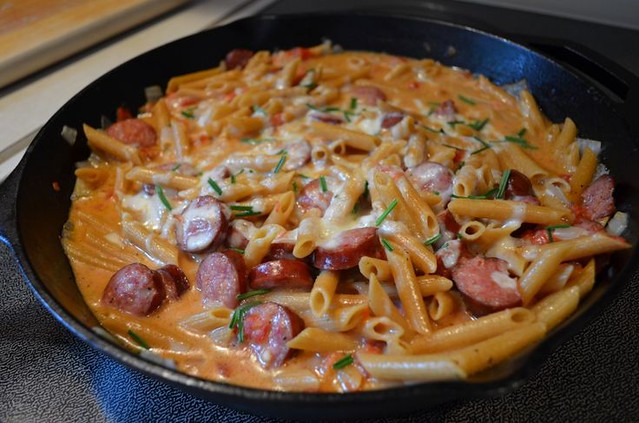 In a cast iron skillet, heat the oil until smoking.  Add the sausage and onion to the pan, and cook until lightly browned, about 4 minutes. Stir in the garlic, and cook for an additional 30 seconds.

Add the broth, tomatoes, heavy cream, uncooked pasta and pepper, and stir to combine. Bring to a boil and then cover the skillet and reduce heat to medium-low. Simmer until the pasta is tender, about 15 minutes, stirring once or twice while cooking.

While the pasta cooks, preheat the oven broiler. Remove the skillet from the heat and stir in 1 cup of the cheese. Add salt to taste. Top with the scallions and remaining cheese. Broil until the cheese is melted and lightly browned, about 3 minutes.

Happy #menumonday ❤️ I am feeling ON IT today, so our menu for the week is slightly ambitious. We’ll see how I do sticking with it! Also, Wednesday kicks off the Lenten season - which means we’ll be meatless every Friday AND I’ll be sharing a new meatless dinner on the blog every Friday too! I’m pumped for you guys to see what’s in store! #mealplan #mealplanning #mealplanner #menuplan #menuplanning #menuplanner
Those PB&J Stuffed #Pancakes I teased you with the other day are now on the blog! Link in profile today or find it at KateRecipeBox.com