One of the hardest things about meatless Fridays, for me, is that I don’t usually cook on Fridays. It’s our typical date night so we’re usually going out. But, when I go out I’m always drawn to a burger. Or steak. Or something else that’s off the menu on Lenten Fridays. So, we stay home and I cook, even though I usually don’t want to.

Quick meals make it easier to not throw in the towel and order a pizza. These were whipped up in no time and they were really good. 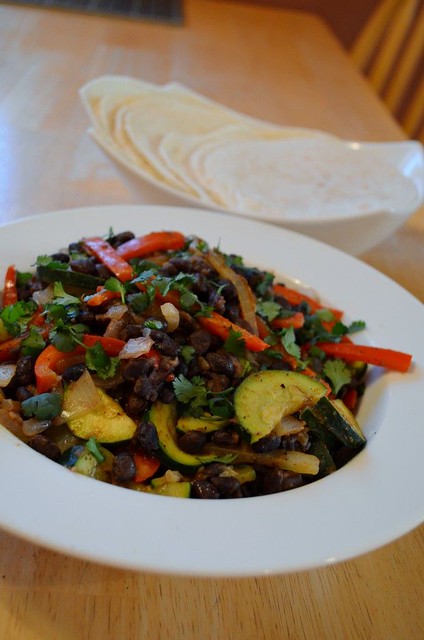 In a large skillet, heat oil until shimmering. Add in beans, pepper, onion and zucchini and cook until the veggies are nearly done. Stir in the cumin, chili powder, garlic, salt and pepper and cook for a few more minutes.

Sprinkle with cilantro, if desired. Serve in tortillas.

Lent begins today, which means our Fridays will be meatless until Easter. I've rounded up the best meatless meals from the blog over the last year - whether you're abstaining from meat on Fridays during #Lent, doing #meatlessmonday or just looking to incorporate some more meatless meals into your meal plans, this list is a great place to start! Which of the meals would you want to try first? Link in bio today or find it at KateRecipeBox.com
#ad #SpringSweetsWeek is going to be VERY sweet thanks to @dixie_crystals 😍 We’re going to be working on our recipes super soon - who wants some sneak peeks?!