I’ve got these filed under “easy enough to throw together with a super fussy baby in tow”. Because that’s totally a file in our house right now. Teething, man.

As simple as these are, they took all day to make. I caramelized the onions during the first (30 minute) nap. Fried up the bacon during the second (20 minute) nap. Assembled and wrapped them in foil while I wore him on my back and then threw them in the fridge until ready to bake. It was just one of those days. 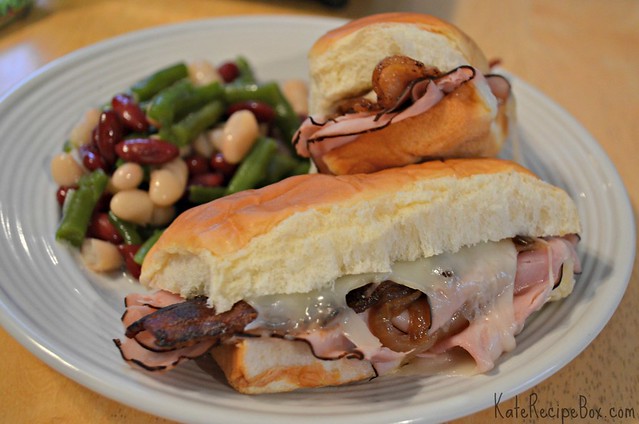 In a frying pan over medium-low heat, melt 1 Tbsp. of butter and then add onions. Cook, stirring occasionally, until caramelized. When done, transfer to a bowl and wipe out the pan. Cook the bacon in the same pan, removing to a paper-towel lined plate when done.

In a microwave-safe bowl, melt the remaining butter. Whisk in the mustard and Worcestershire.

To assemble the sandwiches, brush some of the mustard mixture on the cut side of each roll. Divide ham between rolls and top with caramelized onions, a slice of bacon and a slice of cheese.

Wrap assembled sandwiches in foil. Bake at 350F degrees for 10 minutes or until warm and melty.

#ad Soft, cheesy dinner rolls... made in the slow cooker! These are the PERFECT accompaniment to all the soups I’ve been sharing and they’re on the blog today! Link in profile today or find it at KateRecipeBox.com @rhodesbread
It may feel like a Monday, but it's #TableTalkTuesday! This one is a great one to reflect on for yourself - and to ask the people in your life! Knowing what makes those around you feel loved is an important! Tell me below, what makes YOU feel loved?