I’ve been taking a step back from blogging lately. This has always been a hobby for me and when it starts to feel like a chore, I know it’s time to take a breather and wait until I feel excited about it again. This time, inspiration struck in the form of a Facebook post. My friend, Caitlyn, posted the video for these and since I had everything in the house already, I just had to try them out.

These came together easier than I was anticipating and they looked awesome. I made them in cupcake tins, but I think if you doubled the recipe and put them in round cake pans they would work great as a pull-apart dessert. They were also good reheated in the oven. If you’re looking for a different take on apple pie for Thanksgiving, this is a great option! 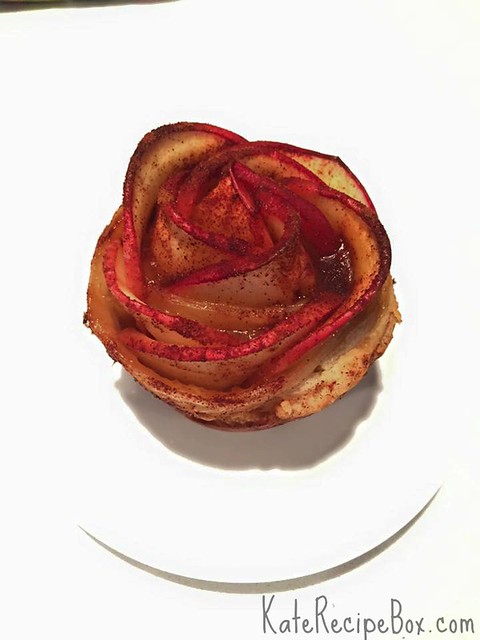 Preheat the oven to 375F degrees. Spray a cupcake pan with nonstick spray.

Place the apple slices in a bowl and cover with water. Add lemon juice, toss to coat. Microwave on high for 3 minutes then set aside.

In a small bowl, whisk together the peach preserves and 2 Tbsp. water. Set aside.

Take one puff pastry strip and brush it with the peach preserves mixture. Place one apple slice along the top of the strip, with the rounded side overlapping the top. Place another slice overlapping the previous slice. Repeat until the end of the strip is reached – the top should look like a scalloped edge. Sprinkle with cinnamon sugar. Carefully fold up the bottom of the puff pasty strip to form a pocket for the apple slice. Starting from one end, gently roll the puff pastry to create the look of a rose. Press the end together and place in the prepared cupcake pan. Repeat 5 more times, until all the strips are used up. Sprinkle again with cinnamon sugar.

One thought on “Baked Apple Roses”

Lent begins today, which means our Fridays will be meatless until Easter. I've rounded up the best meatless meals from the blog over the last year - whether you're abstaining from meat on Fridays during #Lent, doing #meatlessmonday or just looking to incorporate some more meatless meals into your meal plans, this list is a great place to start! Which of the meals would you want to try first? Link in bio today or find it at KateRecipeBox.com
#ad #SpringSweetsWeek is going to be VERY sweet thanks to @dixie_crystals 😍 We’re going to be working on our recipes super soon - who wants some sneak peeks?!