I’ve been sitting on this recipe for weeks because I wanted to save it for #CookoutWeek – I’m so sorry I’ve been holding out on you guys. But, I’ve officially found my favorite way to grill up sausage.

In the past, I’ve always sort of failed at sausages on the grill. It would sound like such a good idea and then they’d end up undercooked on the inside or overcooked on the outside – or both. Braising them on the grill and then just transferring them to direct heat at the end eliminates all of that – and it’s absolutely delicious.

I had picked up these sausages on a whim at the farmer’s market and they were hands down the best impulse purchase I’ve made in a long time. I already can’t wait to make these again!

In a large skillet over medium-high heat, heat the oil until shimmering. Add the sliced peppers and onions and toss to coat in the oil. Cook, stirring frequently, for about 8 minutes – until softened and browning. Stir in vinegar and sugar until the sugar is dissolved. Season with salt and pepper and set aside.

Light one side of a grill and allow to preheat for about 10 minutes.

Transfer the peppers and onions to a 10″ disposable aluminum pan. Push the sausages into the pepper mixture.

Place the tray on the heated side of the grill until simmering. Move to the non-heated side and close grill. Cook over indirect heat for 20 minutes, flipping the sausages halfway through.

Use tongs to remove the sausages from the peppers and onto the hot side of the grill. Cook, turning often, until browned – about three more minutes.

Serve sausages in rolls, topped with peppers and onions. 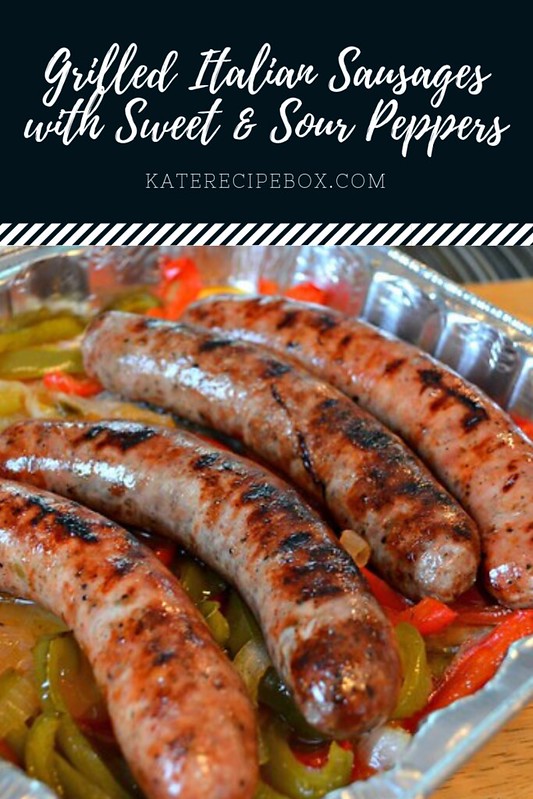 #ad Freezing cold weather is the perfect time to start thinking about #springsweetsweek - thank you to @adams1888 for sponsoring this fun event!
#menumonday and in hindsight I must have been craving a burger during meal planning 😂 #mealplan #mealplanning #mealplanner #menuplan #menuplanning #menuplanner